A One Man Show by Andreas Göx 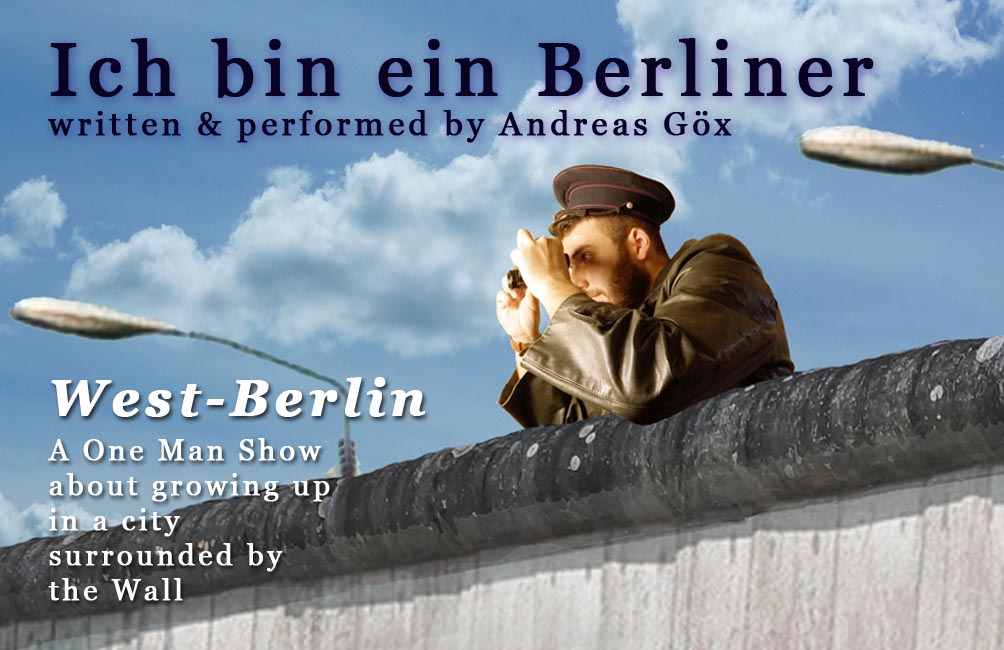 „Ich bin ein Berliner“ is a collection of short stories about
growing up in West-Berlin, surrounded by the Wall.

Written and performed by Andreas Göx in English
Produced and directed by Thérèse Browne
Duration: 50 minutes

„Ich bin ein Berliner“ is about the personal experiences of a Zeitzeuge,
dealing with the political realities of the Cold War and the period following
the fall of the Berlin Wall.

“The place where I come from was a rather strange one.
I grew up with a wall around my city.
I didn´t know it any other way.”
(The Point of no Return)

“These were two worlds apart, separated by a wall,
which ran through everybody ́s head.”
(In Retrospect)

May 29th, 2020: LISTOWEL WRITERS´ WEEK, Ireland.
November 13th, 2019: VILLA NEUKÖLLN.
November 10th, 2019: PAVILLION am Kurfürstendamm.
In co-operation with the Mauerstiftung Berlin and the Kulturprojekte Berlin,
as part of the official celebrations of the 30th Anniversary of the Fall of
the Berlin Wall.
April 25th, 2019: „Ich bin ein Berliner“ premiered at OBLOMOV, Berlin.

Chapter 1: The Point of no Return

The place where I come from was a rather strange one. I grew up with a wall around my city. I didn´t know it any other way. The world stood still in West-Berlin. The parliament had become a museum. It was the time of the Cold War.

And nothing happened for decades. The Wall would stay forever. Nobody could imagine that it would ever change.And then the 80´s arrived, and I began to work as a taxi driver. Starting my shift early in the morning I took over the cab from an old colleague. Paul Herbert. He was a legend. Paule and his car had travelled over one million kilometres. He had seen a lot, Paule was driving taxi since the late fifties.

He told me about the night when he was driving home after his shift and got stopped at Oberbaumbrücke. Barbed wire and East-German soldiers had blocked the bridge.

“Can´t you see it, we´re closing the bridge!”

Paul Herbert didn´t ask why, in the East it meant you question the authorities. Why was a dangerous word, it was a sign of subordination.

“Yes you may, but once you are past this checkpoint, you can not return. West-Berlin will be cut off from tonight on. No more trespassing!”

Now Paule knew what was going on! And there he was: I live in the East and work in the West. What shall I do now? Sitting in his taxi Paule did not know what to think. He had no idea! The soldier was staring at him.

“Make up your mind. People are waiting!” The soldier became impatient.

But Paule was at a complete loss, unable to assess the situation. Finally, he turned the cab around and went back to Kreuzberg.

Paul Herberts life was never the same again after that night in August 1961. Half the city disappeared over night. For everybody. East and West.

Well, I cannot imagine what this must have been like for my colleague and every Berliner for that matter. Suddenly, being cut off from the other half of the city, a permanent barrier through the heart of Berlin – and to be separated from your loved ones, for ever!

But for me during the 80´s it was just a case of getting a visa which had to obtained three days in advance in order to cross the checkpoint.

This was not a joke. Tourist had to be written down. This was my reality. Being a tourist in my home town!